Getting organized to write: idea catchers

The absolutely most important item for any writer to have organized is his or her ideas. 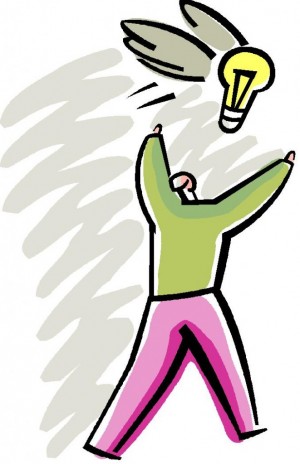 Everything else can get messy or be allowed to sink into oblivion if necessary, but ideas are the straw writers must have in order to spin their gold.

So how do you keep those ideas safe?

First, I never go anywhere without a small notebook. After years of trying out various styles, my preference is a small, spiral bound notebook that has plain (unlined) pages. It’s about 4″ x 6″ at the most, and will fit into my purse quite easily. A man might want an even smaller notebook, and a thin one that will fit easily into a pocket.

A small sketch pad is basically the thing. I prefer the coils down the side because then you can slip a pen inside them and always have the pen and notebook together. I have had some with coils on the top, including a black one with green pages that had a cut-out of a light-bulb on the front cover. Perfect concept! 🙂

I mentioned during a workshop once that I had been having trouble finding such notebooks, and one of the participants later sent me two beautiful little notebooks—spot-on what I wanted—with wrap-around covers. I’ve never seen them since, but usually I can find something usable in the “art” area of Staples or Walmart. Occasionally a dollar store will have something appropriate.

I do use the longer, lined “Reporters” notepads as well, but only when I’m doing interviews or otherwise taking notes.For my idea-catcher, I like having unlined pages so that I can scribble large or small as desired, draw a picture of some sort, create a small chart, etc.

Never let a good idea—or even the vague beginning of an idea – escape. Write it down on something! 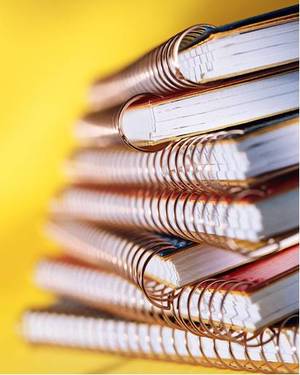 True confessions: Yes, I have occasionally  opened my notebook while engaged in another activity. Okay, if you must know, I was driving on the 401 in Toronto – think freeway with a lot of traffic – when  Bob McCown, prime time talk show host for the FAN 590, gave me the idea for what became the plot of Glitter of Diamonds. I still remember scrambling with one hand to open my purse, pull the notebook out, and scribble the sentence Bob had just said on a page so I got his words down accurately.

But usually it’s easier to pull out the notebook and jot down a few things. Words heard in passing in a check-out line; a situation or a person observed while in a restaurant or shopping mall; a sentence that stands out in a sermon or conversation; a thought that seems to come out of nowhere and deserves to be remembered…. Sometimes I write a few words out of anger at an unjust situation I have observed. Sometimes I see a story in the newspaper or on the internet that catches my attention.

When I’m home, I don’t reach for my notebook. Instead, I have several small stacks of 2″ by 2″ papers by each phone and on my desk and night table. In a pinch, I’ll grab a small post-it note. Just the ordinary yellow variety.

The trick is to capture the idea on a single piece of paper.

Yes, you might want to carry a small recording device with you. Makes driving safer if that’s when you get a lot of ideas. However, you likely still want to get them down on paper at some point.

To see my office and get more details, watch my YouTube video, “Organizing to Write: Your Space.” 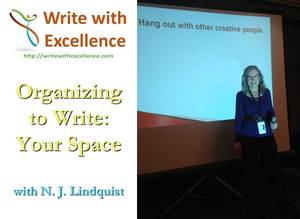